This  is Greece where they lived.  But it has changed over the years!

A greek mythology the Monsters the God… But the monsters are so interesting like the Chimera, Hydra, Cerberus, and the Minotaur.  You are just about to go back in time and learn about them! First you are going to learn about the Hydra. Then the Chimera and so forth.  Are you ready let's go! 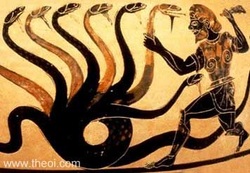 Hydra: The Hydra is a 9 headed dragon and it will grow 2 more if you cut of one of the heads. It’s siblings are the Nemean lion, the Chimera, the Sphinx and the cerberus.The Hydra is a water serpent and it hunted in the swamps of Lerna which he poisoned the water with his venom  .  Herakles was sent to destroy her.  But each head he cut off 2 more grew back.  Something funny during the battle happened Herakles crushed a Giant Crab.   After the battle he Crab and the Hydra were put among the stars by Hera.  The Hydra was living in a  swamp by a village well a little outside the village which he poisoned the water with his venom.  It’s nine heads were indestructible .  Herakles hunted this monster with burning arrows.  Herakles with his club or a sickle he cut off its heads.  But 2 more would grow back.  That giant crab I was talking about well it came to help the Hydra in the battle the crab also hert Herakles.  Herakles had a friend to, it was Iolaus! 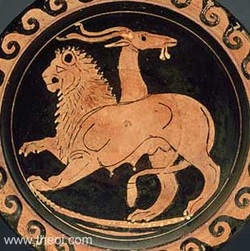 Chimera:  This monster was a monstrous creature. Its siblings are the Nemean lion, the Hydra, the Sphinx and the cerberus.  This monster has a head and a body of a lion, a goats head on it’s back and a snake tail which has a head.  The hero Bellerophon was commanded to slay the Chimera and rode into battle with Pegasus the winged horse. The Chimera can breathe fire from all of it’s heads. The chimera would attack the Village of Lycia. She attacked woman, children and livestock. After Bellerophon defeated the Chimera he fulfilled more tasks.  These tasks were led to Bellerophon left without Pegasus because Pegasus got bit by a fly and bucked Bellerophon off.  He was not hurt but he couldn’t hind Pegasus. 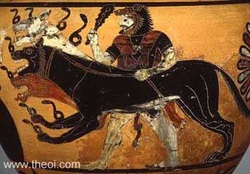 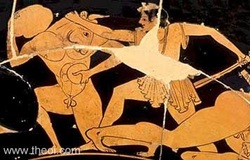 Minotaur: This Moster has a head of a bull and body of a man. Siblings Ariadne and Phaedra.  The monster was strange and unnatural.  This monster also walked on it’s two feet. The Minotaur had a very hard diet.  He ate human flesh so the Queen and King hired someone by the name of Daedalus to make a maze and put the Minotaur in it so it would never come out.  Theseus (who by the way looks like a fighter) went into the maze to slay the minotaur.  And after a hard fight the minotaur was slain by Theseus. This monster was sent from the minos. They gave him bodys to eats.
You have just learned about some of the monsters in greek mythology!  The sites are one the bottom of the page if you want to learn more about these monster. THAT IS ALL THANK YOU FOR READING MY PAGE!   Please coment! hope you liked it!

These are the sites and pic’s I used http://www.theoi.com/Ther/DrakonHydra.html